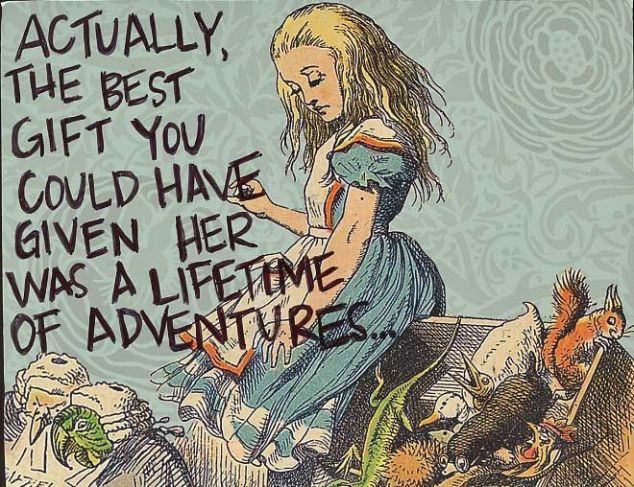 In the run-up to Valentine’s Day, I’ve been seeing the above image around a lot, with the quote “Actually, the best gift you could have given her was a lifetime of adventures…”. Largely shared on Pinterest or Facebook, and with the quote often attributed to Lewis Carroll, which made me really irrationally angry because COME ON CHECK YOUR SOURCES PEOPLE THIS WAS NEVER UTTERED IN ALICE IN WONDERLAND (In case you were wondering, I traced it back to a card on postsecret.com. Now you know). But after I got past my book nerd rage, I started thinking about life and relationships and adventure, and what they all mean to each other. Then this morning I read this article that Beverley over at Pack Your Passport referenced in her weekly newsletter, and a blog post started to formulate in my mind. I’m not sure quite where it’s going yet, so buckle up – it could be a windy road.

A very specific kind of adventure is very much ‘in’ at the moment. The rise of aspirational bloggers, vloggers and Instagrammers has led to a near-fetishisation of the long term travel lifestyle, and of these exciting and adventurous digital nomads who are making careers out of living glamorous lifestyles in photogenic locations, unshackled by commitments like marriage, home ownership or the 9 to 5. We’re living in a brave new world where the traditional cornerstones of a ‘successful’ life are being sneered at and rejected by a new generation but, while I’m excited to be a part of it, it’s not without a distinct element of smugness that grates on me.

With these new values has come a sense of competition between those living the ‘conventional’ life and the new wave of digital nomads. We’re not sure who instigated it, but a cold war is underway and the weapon of choice is a devastating blend of FOMO and superiority. The internet is awash with articles listing the things you need to do before you settle down, or the reasons you should quit your job to travel, or quotes like this: 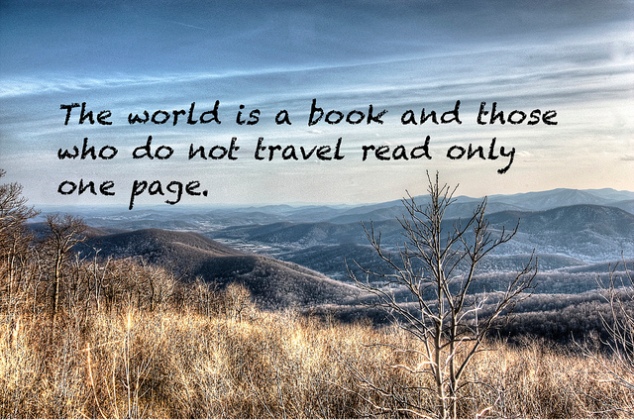 Somewhere along the line we’ve boiled the concept of ‘adventure’ down to one very strict criteria, and those who don’t ditch their lives to travel the world are being characterised as boring, small-minded slaves to the man who are fitting into the married with 2 kids mould solely because they don’t have the imagination to come up with anything better. But isn’t this counter-productive? It’s fantastic that our generation is creating a brave new world where we don’t have to wear suits, sit in an office all day or have kids by 30 in order to be deemed successful, but some people still want those things. If we start to judge that way of life in the same way that gap years and long term travel were once judged (and arguably still are), then all we’re doing is swapping one society-approved lifestyle for another.

I’m definitely part of the group who get their kicks from travel; while I wouldn’t want to do it full-time, I never feel more alive or more adventurous than when I’m discovering new places and throwing myself into unfamiliar cultures. But going to university was also an adventure, as was moving in with a boyfriend for the first time, as is tackling a big project at work. I have friends who are investing huge amounts of time in their careers, or getting engaged, or raising kids, and when I spend time with them it never feels like they’re ‘only reading one page’ or ‘letting life escape them’. They’re totally immersed in their own adventure, and it’s no less scary or exhilarating or rewarding than jetting off around the world.

Maybe instead of arguing about whether or not it’s possible to have ‘adventures’ after commitment or marriage, we should instead just entertain the notion that that the two things aren’t mutually exclusive. If travelling the world is what makes your heart sing then that’s awesome, but if your highs come from bagging that big promotion or watching with your partner as your kid takes their first steps, then that’s pretty damn cool too.

I guess what I’m ultimately saying is, yes, the best gift you can give anyone, including yourself, is a lifetime of adventure. But what that adventure looks like is completely up to you.