On Friday night I spent my evening trying out a Leeds first for me – Light Night. Even though the event has been running for several years I’ve always managed to be busy or out of the city, but now I’ve finally been to it I think I might be hooked. It felt like the true start of autumn – by the time I went out at 7pm it was already almost completely dark, and I had a fur-lined jacket and bobble hat on to protect myself against the chilly evening air.

I think half of Leeds had turned out for the same reason I had, but luckily there are so many different things to see that the crowds get spread out between them – people are constantly coming and going so you never feel like you’re crowded out of anything. I looked at the website and planned out a rough route before I set off to make sure I didn’t miss anything I really wanted to see, but we also stumbled upon surprises along the way.

I met a few friends at the bottom of Briggate and we started with the Ethereal Freeze ice sculptures near the Trinity Centre, before grabbing a map from the Information stand and moving up towards Merrion Gardens to see the Giant Dandelions installation – a forest of giant dandelions made out of recycled plastic bottles with light bulbs at their centres to create an ethereal glow.

Then we headed on to Millennium Square to catch the first showing of The Phoenix in the Stone, a fable told in light and sound by Illuminos. The story was projected onto the front of the Civic Hall, drenching the stonework in vivid colours and accompanied by voice narration and a dramatic music score. This was one of the most fun shows of the night, even if it did take us about 10 minutes to work out how to get out of the square’s limited exits afterwards. 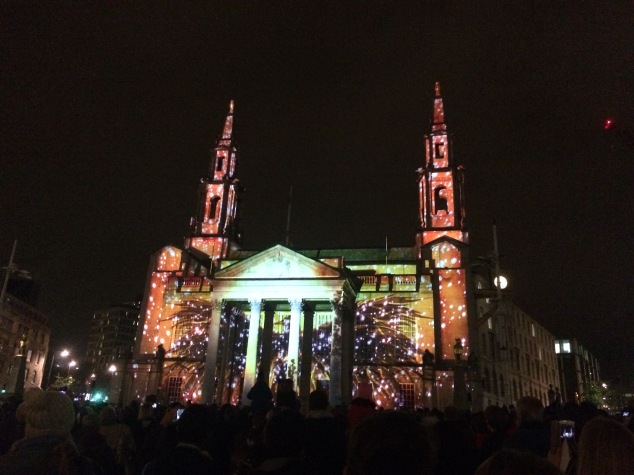 Next we went down past the overwhelming crowds on the Headrow to Park Square, one of my favourite lunch spots in summer and on this night host of my favourite installation by far – Apparatus Florius. A complex network of wires tied between trees and illuminated with neon lights created a geometric strobe effect. More lights illuminated the leafy backdrop of the trees overhead, and they flashed in time with musical accompaniment. We had the sensation of being in a club waiting for the beat to drop, and I’m now convinced that this is an awesome decor idea for a warehouse party.

After spending at least 20 minutes standing under the hypnotic strobing lights, we moved on to City Square to see The Falls, an amazing digital waterfall projected onto the front of the Queens Hotel. The installation explored the different forms of water, starting with tiny drops of condensation floating in the air, then progressing to light, bouncing cascades and climaxing in a powerful waterfall tumbling down the front of the hotel and crashing onto the balcony just above the entrance doors. 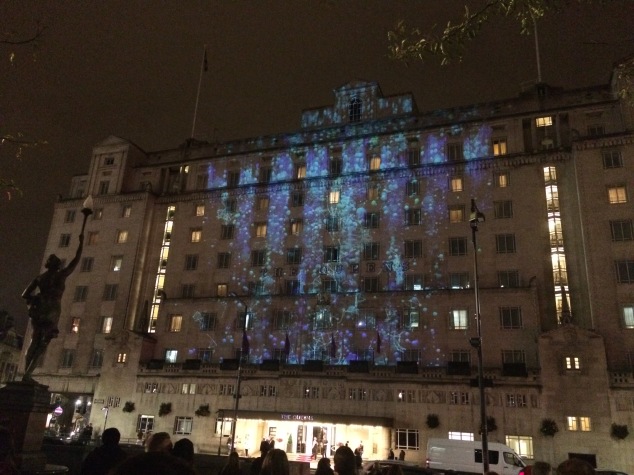 As we made our way towards Leeds Dock our weather luck ended and the heavens opened, persuading us to stop off at The Tetley to see what they were up to. We wandered into a screening of video called The Way Things Go, a domino effect-style sequence featuring fire, chemical reactions and a range of everyday items and DIY equipment, and got completely hooked on watching the chain reactions that drove the movements forward.

We then finished off at Leeds Dock where the beautiful Light Water, Dark Sky installation was set up on a pontoon in the canal. You’re meant to walk into it with a headset on that streams the accompanying sound, but the queue was long and we were cold and wet so we made do with watching it from dry land.

I went home cradling a carton of steak and chips from a street food van and looking forward to a warm dry flat, but also feeling the happy glow you get after a night of unexpected adventure. I will never cease to be amazed by all the wonderful creative talents we have living in Leeds, and it’s such a privilege that we can enjoy huge city-wide events like this for free. It’s things like this that make Leeds such a strong candidate for European Capital of Culture, so let’s keep up the good work!

Did you go to Light Night? Tell me about your favourite parts in the comments – I know I missed loads!

2 thoughts on “A Light Night Adventure in Leeds”