When I was searching for a city break earlier this year Krakow never even crossed my mind until several friends recommended it to me, but it ticked all my boxes and I fell completely in love. It was cheap, safe, compact enough to walk everywhere, and packed with beautiful sights and cool little cafes that made it a perfect weekend break for me.

I love planning my holidays almost as much as I enjoy doing them, so while I did leave my research a little late, by the time I arrived in Krakow I had several big lists of things to do, see and eat while I was there. This is my ultimate guide to experiencing the best this city has to offer.

There are basically two main areas where tourists stay in Krakow, the Old Town and Kazimierz. You shouldn’t worry too much about which neighbourhood to stay in as Krakow is compact enough to easily move between them, but they have such different vibes that you’re probably better suited to one or the other.

I stayed in the gorgeous Smile Apartments which was about halfway between the two areas, so was able to get a good feel for both of them. Let’s weigh up the pros and cons of both…

The main benefit of the Old Town is that it is the heart of the sightseeing district – if you stay here then most of the city’s key sights are right on your doorstep. St Mary’s Basilica, Wawel Castle and the medieval city walls are all a stone’s throw from your door, plus this area has the most picturesque streets. It’s also closest to the train station, and has tons of restaurants (although, as in all tourist hubs, high food quality is not guaranteed).

For me the main downside of the Old Town is just how busy it is. Its many highlights mean that you’re not the only one who wants to be there, so if you’re staying right in the middle of it I imagine it could feel a bit overwhelming at times. 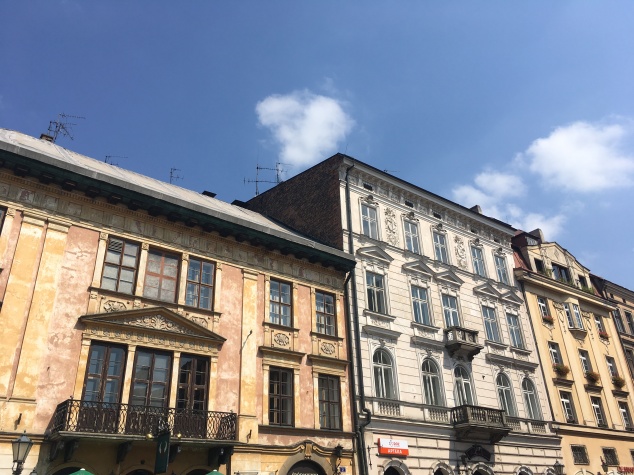 Kazimierz is the Jewish district, rocking a sightly hipster vibe and frequented by tourists and locals alike. Here you’ll find synagogues and Jewish museums, as well as Corpus Christi Basilica, amazing street art and the Church on the Rock, one of Krakow’s underrated gems. It’s also got the coolest bars and some great restaurants, where you feel like you’re getting a more authentic dining experience than in many Old Town restaurants.

The only con of Kazimierz is that you are undeniably further away from the main sights and transport links, so if you struggle with mobility you would probably find it more convenient to stay in the Old Town. 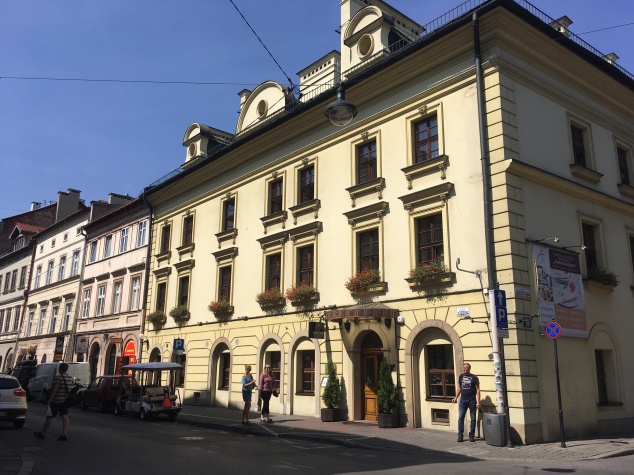 For a relatively small tourist city Krakow has so much to see – I was actually surprised that in three and a half days I still couldn’t fit everything in! If you’re a bit limited for time, these were my favourite sights and activities that you absolutely shouldn’t miss.

The huge Main Square in the Old Town is the hub of the city, where you’ll find St Mary’s Basilica, the Cloth Hall and the Town Hall Tower. It’s a beautiful square and one of the largest medieval plazas in Europe, lined on all sides by elegant townhouses and always buzzing with people. As I was exploring the streets of the Old Town I found that I kept being drawn back into the square, exiting again by a new corner each time until I’d covered every side of the square. 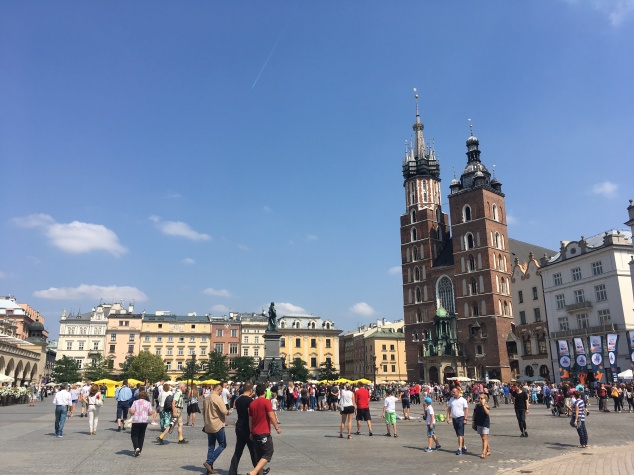 Wawel Castle was really not what I imagine when I hear the word ‘castle’. It’s more of a castle/palace blend with bright terracotta roofs and the Gothic spires of neighbouring Wawel Cathedral, which are a world away from the grey stone of English castles. You can pay to go inside and view the state rooms and royal apartments, but I was content to wander the grounds and admire the views of the city. 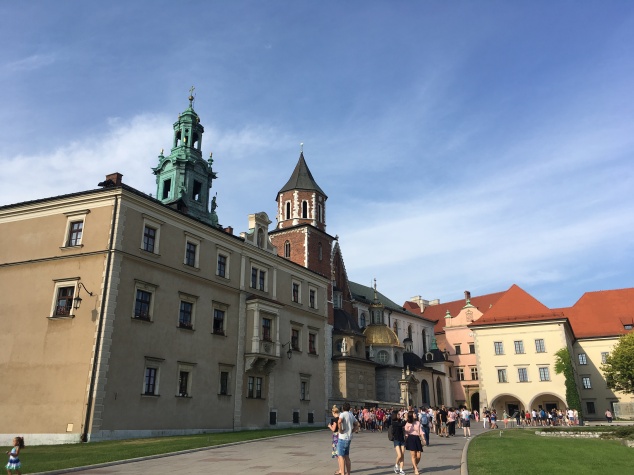 Church on the Rock

Church on the Rock must be one of Krakow’s underrated gems – it was one of my favourite spots but when I visited there was almost nobody there. Tucked away down a dead-end street in Kazimierz, this white church sits right on the banks of the river and is reached via a beautiful marble staircase. Once you’ve visited, you can cut through a small gateway at the back of the grounds to reach the river. 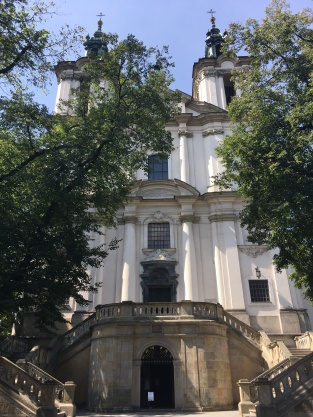 Are you even in a tourist city if they don’t have a bridge covered in padlocks? Krakow’s ‘Lover’s Bridge’ is Bertanek, but what makes it different are the sculptures of acrobats placed among the suspension wires, an originally temporary exhibition by artist Jerzy Kędziora that is now a permanent fixture of the city. The silhouettes look so effective against the sky, and when its windy the figures seem to move slightly as the bridge bobs slightly on the suspension wires.

Located just across the river in Podgorze, Ghetto Heroes Square is a simple but haunting memorial to the Polish Jews who were imprisoned and killed in the Krakow Ghetto and concentration camps during Nazi occupation. 70 bronze chairs now sit in one of the neighbourhood’s main squares, as a haunting reminder of all the people who are no longer there to occupy them.

Krakus Mound is one of the best viewpoints in Krakow, a grassy hill about a 40-minute walk or short tram ride out of the city centre that is most popular for its sunsets. It’s a slightly tiring walk, especially when you’re power walking up the hill because you’re running a bit late for the start of sunset like I was, but it’s totally worth it for the spectacular views of the city. A lot of people bring rugs, wine and a picnic, which once I’d seen it seemed like the best idea in the world.

Krakow has two main companies offering free tours – Cracow Free Tours and Freewalkingtour.com – which gives you plenty of options for tour themes and times. The most popular, predictably, are the Old Town and Jewish Quarter tours, but I went for the Street Art tour with Freewalkingtour.com. Even though it was pouring with rain I had such a good time – our guide was lovely, I learned so much, and they give out really useful leaflets packed with info on Krakow sights, dining and culture.

Auschwitz is never going to be a fun day out and I struggled for a while over whether to go at all, but it’s such an important piece of history and while it was a difficult day I am glad that I did it. There are a few things which detracted from the experience – it was incredibly busy and there were a few people in my tour group who were almost troubling in how little the experience seemed to affect them – but overall the museum is done in a respectful and tactful way.

The Auschwitz camp has largely been transformed into a museum with information boards, photographs and surviving belongings from victims, while Birkenau has been left completely as it was so you can see the conditions the prisoners had to live in. I don’t want to talk too much about it and I couldn’t bring myself to take photos, but suffice to say it’s not an experience I’m going to forget in a hurry.

Dining alone is an aspect of solo travel that I still find a little intimidating, but there’s no way I’m going to let that keep me from enjoying good food. I actually found Krakow to be quite solo-traveller friendly as their casual dining scene is great, and I made some amazing restaurant choices, if I do say so myself.

I went to Moment for breakfast, but it’s also busy in the evenings when I hear they serve fantastic cocktails. Their breakfast menu is served until 2pm, includes tea or coffee and has a range of Polish and international options – I chose a coconut pudding chia bowl with fruit, granola and maple syrup which was one of the best ‘healthy’ breakfasts I’ve ever had. They have outdoor seating on the pavement, which was great for people watching. 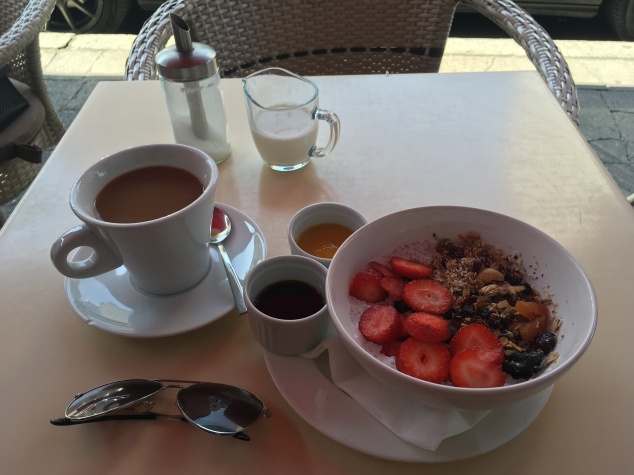 Milkbars are a staple of Polish dining culture, offering traditional food at cheap prices in canteen-style eateries. My first meal in Krakow was at Tomasza, a tiny place in the Old Town where you order at the counter and find a seat at among the limited number of tables. My plate of meat pierogi was delicious, and I loved that they have a large communal table for solo diners.

This was the one ‘posh’ meal of my trip, where I strode into the candle-lit restaurant quite confidently after vodka shots and Polish martinis with some travellers I met at Alchemia. The restaurant’s music and decor embraces Kazimierz’s Jewish heritage, and I was sat at a table with antique sewing machine built into it. My duck with cranberries and fried potatoes was perfectly cooked, served with salad and a warming glass of red wine. 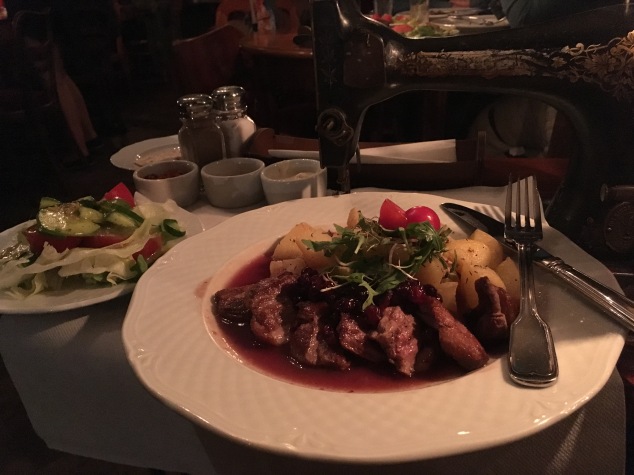 When in the Jewish Quarter, surely you have to have bagels at least once…even if they are New York-style. I stopped at Bagelmama to grab a quick breakfast before my Street Art tour – the staff were so friendly and helpfully offered me the take-out option in case I ran out of time and had to dash off to the tour. My bacon, lettuce and avocado bagel was tasty and filling – just what I needed to set me up for the day.

When I wanted one last plate of pierogi before heading to the airport I chose Pierogarnia Krakowiacy, a quaint little restaurant a couple of streets from the Main Square. They had run out of duck and apple which almost broke my heart, but I settled for pork with bacon bits and onions. The major downside of dining alone in Krakow is that you can’t split two dishes of savoury and sweet pierogi – the cherry with mascarpone were seriously tempting.

So that’s my guide to visiting Krakow! Have I persuaded you to go,or have you already been and think I’m missing something from my list? Tell me in the comments.