On my last day in Krakow, I awoke to torrential rain. The weather forecast had been predicting it all week, but it was still disappointing to open my curtains and see the water bouncing off the pavements, streaming down the gutters in mini rivers. I pulled on my very un-waterproof shoes, grabbed my umbrella and headed out towards Kazimierz, accepting that I would be flying home feeling very soggy.

I could have headed for cover – spent the day in a museum or watched the world go by from a cafe. But today was the day of the street art tour I had been looking forward to since I arrived in Krakow, and I wasn’t about to miss it because of a little rain. It’s always seemed odd to me how rarely street art is mentioned in guidebooks – while cathedrals and galleries take pride of place in city break itineraries, this living expression of a city’s culture and identity is always strangely absent. Maybe its transient nature makes it hard to record in books, but it makes it hard to track down and understand without a guide.

Luckily Krakow has a fantastic street art tour run by freewalkingtour.com, which meets by the old Synagogue and takes you on a 2-hour walk around Kazimierz and Podgórze. Our guide Alicija was so informative, and handed out a great Krakow guide that was packed with tips I wish I’d had when I arrived. Here are some of my favourite art pieces from the walk, and the stories behind them.

This was one of the first murals we saw and one of my favourites. Painted by Pil Peled, one of Israel’s most famous street artists, the piece represents the vulnerability and strength that exist side by side in Jewish heritage. Particularly after the Holocaust Jews were seen as victims, their fear and helplessness represented in the mural by the child, but the lion reminds us that the Jews were not just victims but survivors, who have fought to overcome their history and preserve their culture.

I also loved the follow-up story to this painting – that after it appeared, food vans started setting up shop underneath it and the square is now a bustling street food spot. Paint it and they will come… 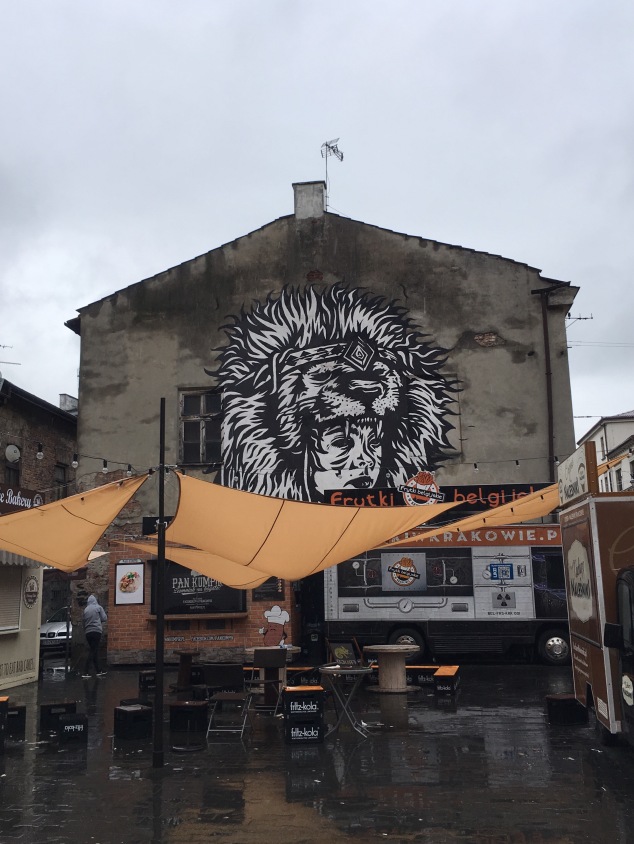 I don’t think this mural has an official name, but it’s bright colours are almost impossible to miss. Painted by British artist David Shillinglaw, this bold mural on the side of a cafe is simply fun, encorporating everyday objects in a surreal and slightly pop art-style design. I got the feeling from our guide that Krakow locals aren’t quite sure what to make of it.

Poland is still a predominantly Christian country, so this huge mural by Italian artist Blu commenting on the dictatorial nature of religion is fairly controversial. This is such a complex piece with many facets – the megaphone that doubles as a church bell, the almost identical people below absorbing the messages without question, and perhaps most interestingly, the face speaking into the megaphone which seems strikingly similar to the faces below.

For God’s Sake, Censorship is Everywhere

This mural was painted by Pikaso in 2012 for the ArtBoom Festival. He originally painted something different that was rejected by the organisers of the festival on the grounds that it was too controversial, and his response was a self portrait with his own face censored by an ugly sweep of black.

Singin’ in the Rain

Stencils are a popular form of street art in Krakow, and one of the best-known is this Gene Kelly figure painted around a lamp post. A recent un-official addition to the piece is a scrawl next to it that reads ‘Fuck Banksy’ – presumably a condescending reference to the now over-used style of the famous Bristol street artist.

This set of portraits is part of a wider collection of the Kazimierz Historical Murals project, depicting five famous figures from Polish history. The five figures are Emperor Józef Hapsburg II, Helena Rubinstein (a Polish businesswoman and philanthropist), Karol Knaus (local architect, artist and conservator), Esterka (the lover of King Kazimierz the Great), and King Kazimierz the Great, and each has a panel of yellow painted over their eyes as if to give them superhero status. 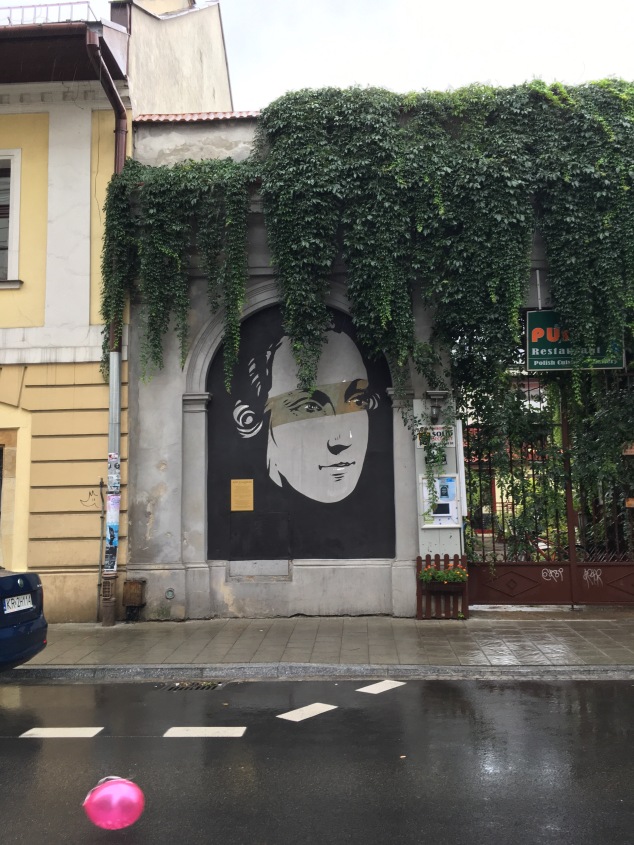 Several of my favourite street art spots don’t have a larger story behind them; they’re not sanctioned of official, just scrawls that someone, sometime, felt they needed to share. Which is one of the things I love most about street art – the purity of the impulse to put something out into the world without fanfare or recognition. 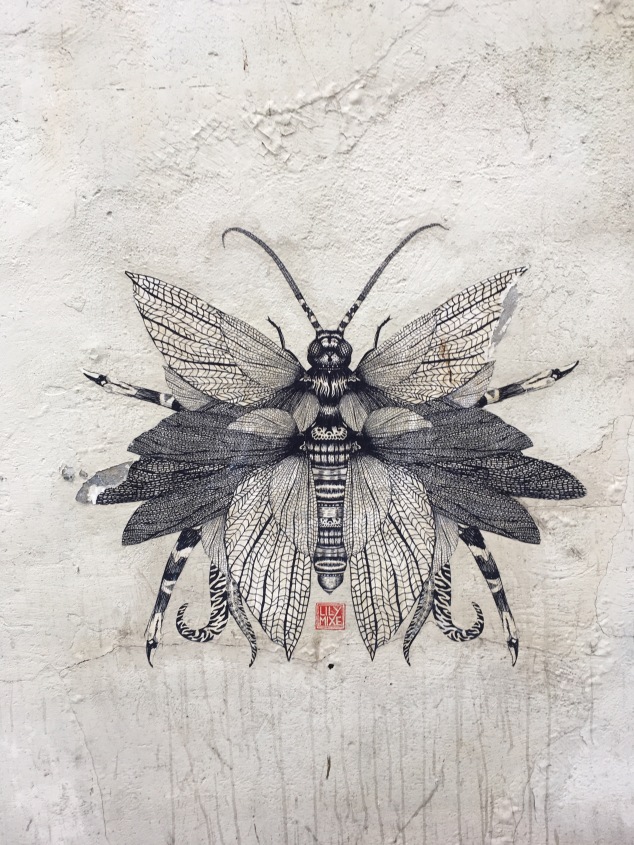 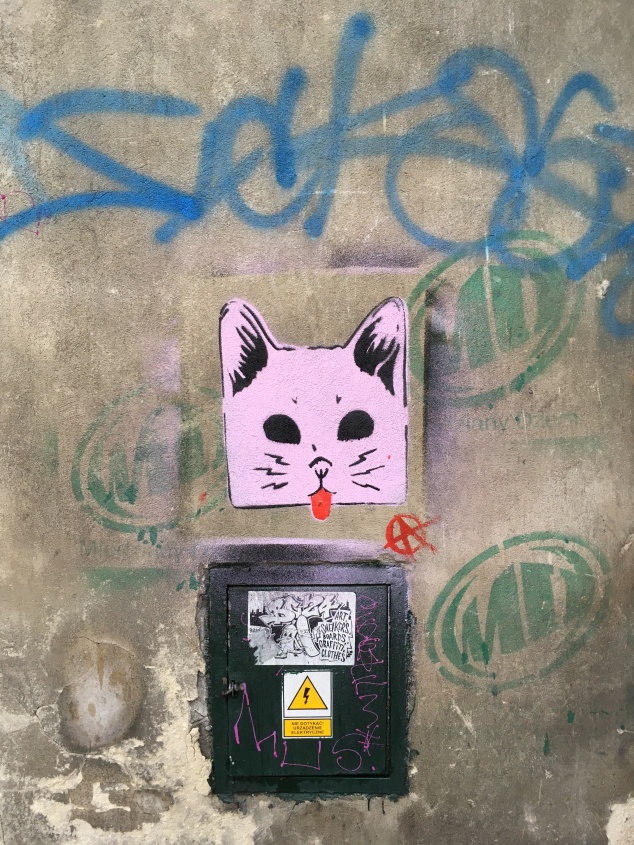 Where is your favourite street art? Let me know in the comments!

3 thoughts on “A Tour of Krakow’s Street Art”